These books are available at the Lynnfield Public Library and are great for middle schoolers looking for mysteries or thrillers. Click the book cover or title to go directly to our catalog, where you can put the book on hold for pick up. Many of the books are also available as ebooks and audiobooks from Libby or hoopla. The books are ordered from newest to oldest, so new additions to this list will always be at the top! Email Lauren at lfox@noblenet.org for more recommendations or information about any of these books.

Catfishing on Catnet by Naomi Kritzer:

Because her mom is always on the move, Steph hasn’t lived anyplace longer than six months. Her only constant is an online community called CatNet―a social media site where users upload cat pictures―a place she knows she is welcome. What Steph doesn’t know is that the admin of the site, CheshireCat, is a sentient A.I. When a threat from Steph’s past catches up to her and ChesireCat’s existence is discovered by outsiders, it’s up to Steph and her friends, both online and IRL, to save her. 11/19/2019

I Have No Secrets by Penny Joelson:

Jemma knows who the murderer is. She knows because he told her. He thought his secret was safe because Jemma has cerebral palsy, and she can’t speak or move. But Jemma observes all kinds of things about everyone around her. His secret is just one of them. And when a new technology means she may be able to communicate and reveal all she knows, Jemma no longer feels powerless in the face of this deadly secret. It’s a race against time before the killer acts again… or tries to stop her. 11/5/2019

Charlie Thorne and the Last Equation by Stuart Gibbs:

Charlie Thorne is a genius and a thief – and she isn’t old enough to drive. Now it’s up to her to save the world. Decades ago, Albert Einstein devised an equation that could benefit all life on earth—or destroy it. Fearing what would happen if the equation fell into the wrong hands, he hid it. But now, a diabolical group known as the Furies are closing in on its location. In desperation, the CIA drags Charlie into the hunt, needing her brilliance to find it first—even though this means placing her life in grave danger. Charlie must crack a complex code and fight to keep the last equation safe once and for all. 9/17/2019

It Wasn’t Me by Dana Alison Levy:

When Theo’s photographs are vandalized, there are five kids at the scene: The Nerd, the Princess, the Jock, the Weirdo, and the Screw-Up. All anyone will say is “It wasn’t me.” Theo doesn’t care who it was, he just wants to stop being the victim. But the six of them have to spend vacation week together “learning to trust” and getting to the truth. His teacher calls it a Justice Circle. Theo calls it his worst nightmare. But as they share their secrets, Theo realizes that he doesn’t know anyone as well as he thought, not even himself. And the truths they share might change their lives forever. 11/13/2018

The drought—or the Tap-Out, as everyone calls it—has been going on for a while now. Everyone’s lives have become an endless list of don’ts: don’t water the lawn, don’t fill up your pool, don’t take long showers. Until the taps run dry. Suddenly, Alyssa’s quiet suburban street spirals into a warzone of desperation; neighbors and families turned against each other on the hunt for water. And when her parents don’t return and her life—and the life of her brother—is threatened, Alyssa has to make impossible choices if she’s going to survive. 10/2/2018

One of Us is Lying by Karen M. McManus:

On Monday afternoon, five students at Bayview High walk into detention: Bronwyn, Addy, Nate, Cooper, and Simon. But Simon never makes it out of that classroom. Before the end of detention, Simon’s dead, and it wasn’t an accident. He’d planned to post juicy reveals about all four of his high-profile classmates to his notorious gossip app, which makes all four of them suspects in his murder. Or are they the perfect patsies for a killer who’s still on the loose? Everyone has secrets, right? What really matters is how far you would go to protect them. 5/29/2017

Florian Bates is twelve years old and has just moved to Washington. He’s learning his way around using TOAST, which stands for the Theory of All Small Things. It’s a technique he invented to solve life’s little mysteries, like where to sit on the first day of school, or which Chinese restaurant has the best eggrolls. But when he teaches it to his new friend Margaret, they uncover a mystery that isn’t little. In fact, it’s HUGE, and it involves the National Gallery, the FBI, and a crime syndicate known as EEL. Can Florian decipher the clues and finish his homework in time to help the FBI solve the case? 8/23/2016

The Charmed Children of Rookskill Castle by Janet Fox:

Something is not right at Rookskill Castle, a rundown Scottish manor shrouded in mystery. The castle is a temporary boarding school for children escaping the Blitz, but soon it’s clear there is something terribly wrong. There are clues hinting that a spy is in the house, and there are undeniable signs of a sinister magic. When the children in the castle’s temporary boarding school begin disappearing one by one, it’s a race against the clock for twelve-year-old Kat Bateson, her two younger siblings, and their new best friend. 3/15/2016 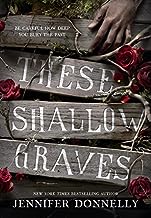 These Shallow Graves by Jennifer Donnelly:

Soon, Jo Monfort will graduate from finishing school and be married off to a wealthy bachelor, but she secretly dreams of becoming a newspaper reporter. Then her father is found dead, having accidentally shot himself while cleaning his revolver. Jo knows he was too smart to clean a loaded gun. The more Jo uncovers about her father’s death, the more her suspicions grow. Then she meets Eddie—a young, brash, handsome reporter at her father’s newspaper—and it becomes clear how much she stands to lose if she keeps searching for the truth. Only now, it might be too late to stop. 10/17/2015

The Blackthorn Key by Kevin Sands:

“Tell no one what I’ve given you.” Until he got that cryptic warning, Christopher Rowe was happy, learning how to solve complex codes and puzzles and creating powerful medicines, potions, and weapons as an apprentice to Master Benedict Blackthorn—with maybe an explosion or two along the way. But when a mysterious cult begins to prey on London’s apothecaries, the trail of murders grows closer and closer to Blackthorn’s shop. With time running out, Christopher must use every skill he’s learned to discover the key to a terrible secret with the power to tear the world apart. 9/1/2015

San Francisco, 1900. The Gilded Age. Lizzie’s passion is science, and she goes on house calls with her physician father. On visits to his patients, she discovers a hidden dark side of the city, full of rumors of the plague. Everyone denies that the plague has reached San Francisco. So why is the heart of the city under quarantine? Why are angry mobs trying to burn Chinatown to the ground? Why is Noah, the Chinese cook’s son, making Lizzie question everything she has known to be true? Ignoring the rules of race and class, Lizzie and Noah must put the pieces together to save the people they love. 8/4/2015

I Am Princess X by Cherie Priest:

Once upon a time, two best friends created a princess together. Libby drew the pictures, May wrote the tales, and their heroine, Princess X, slayed dragons and scaled mountains. Then Libby was in a fatal car accident, and Princess X died with her. Now, May is sixteen and learns about an underground culture formed around a Princess X webcomic. The more May explores the webcomic, the more she sees similarities between Libby’s story and Princess X online. That means that only one person could have started this phenomenon: her best friend, Libby, who lives. 5/26/2019