History of the Library

The origin of the first public library in Lynnfield has a similar story to others in New England towns: it began as a social organization with shareholders and went through various iterations until 1890 when the Commonwealth offered $100 to every town that would appropriate an equivalent amount to establishing a free public library. Lynnfield voted at town meeting to elect a Board of Trustees and to appropriate the funds to acquire the gift. The Lynnfield Public Library opened on July 22, 1892, with a collection of 554 books in a room in the then new Town Hall. At age eighteen, Miss Elizabeth W. Green became the first Head Librarian. In 1904 the library moved to its present location on Summer Street opposite the Common in what was the former Center School House dating from 1856. It is now the Children’s Room in the present library. In 1910 a branch library was established in the private home of Mrs. Cora Pike in South Lynnfield—with only a wooded road connecting the two ends of town. A branch library was built in 1923 on the corner of Salem and Summer Streets. The following year (1924) the circulation at the branch exceeded that of the main library.

The decade from 1950 to 1960 saw some of the biggest changes in Lynnfield as the country experienced a post World War II growth in population and building. The population increased from 3,925 in 1950 to 8,500 in 1960 and the library’s book collection expanded to 10,000. A Friends of the Lynnfield Library organization was begun that same year and has grown to a membership of 181 in 2017.  An approximate 700 square feet addition in 1959 did little to alleviate the serious space problem in the main library.

The addition that brought the library to its present size with its expansive light-filled Reading Room, the mezzanine and the Palladian window that fronts the Common was finished in 1967 and dedicated on December 3, 1967.

In 1974, in response to the Bicentennial, emphasis was placed on collecting, organizing and analyzing local history and genealogy resources. The Local History/Genealogy Collection was begun by then Library Director Marcia Wiswall. It is a small but extensive collection of carefully chosen and highly specialized Essex County and Massachusetts genealogy sources as well as Lynnfield local history resources. This collection has a superb reputation within the larger library and historical and genealogy society worlds.  The family researchers that use it are drawn from local Massachusetts cities and towns, surrounding New England states and the greater United States.

In 1981 the Peabody Institute Library of Peabody initiated an effort to create an electronic catalog of all its materials and the Lynnfield Library was the second library (after Peabody, the founder) to join this library automation project in August 1981. Thirty plus years later  NOBLE (North of Boston Library Exchange), a library consortium with a current membership of twenty-eight public, college, and special libraries, has improved library services by sharing needed library and electronic resources — online periodical databases, downloadable audio books and eBooks and a digital library.

In the mid-1980s, a town-wide Capital Improvement Project made recommended improvements to all Town buildings including the library. A ramp was built on the front of the building and an elevator installed as well as widening the aisles between the bookshelves to make the library ADA compliant. Air conditioning was added and repairs were made to the roof and the HVAC system. The circulation desk was relocated and the unused basement space was converted to space for book shelves. Our first year in the newly renovated library was 1992.

The remainder of the 1990’s through the 2000’s ushered in numerous changes to services, programs, and collections.  In 2017, the library has 73,000 items in the collection. An average of 300 individuals use the library each day and our programming attendance continues to increase, with attendance of 11,000 at programs over the last 12 months, compared to an attendance of 3,500 at programs in 2000. 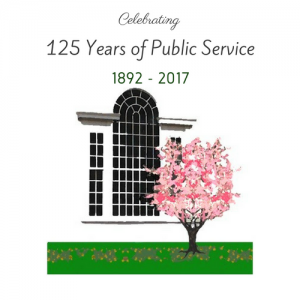 125 Years: A Timeline of Milestones

History of the Library

From the Desk of the Director