by Abigail Porter
Comments are off

Helen served as the first vice president with local well known artist Phil Perkins serving as the first president (1964 – 1965).  Helen succeeded Phil Perkins as president in 1965. The Guild’s first art show was held at the Meeting House in June of 1964. The Guild was wildly successful; its membership grew to over 100 members in less than a year and reached 160 members by 1967. In the 1970’s Helen Malcolm was still active in the Guild, as seen in the Item photograph of Phil Perkins and Helen who were co chairs of the 1972 Spring Show.

The Lynnfield Art Guild is proud of its history which can be seen on its website www.lynnfieldarts.org. While the Guild is retaining several of Helen Malcolm’s paintings in its permanent collection, many paintings are available for sale to the public.  Please contact the Guild through our website if you are interested in purchasing one. The Guild’s mission remains as originally conceived in 1964: to encourage and inspire individuals who have an appreciation and love of art to express their talent and to create art awareness in the community. New members and supporters are always welcome. 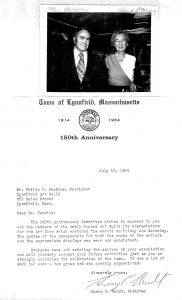 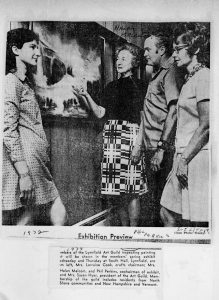