The Library is located at 18 Summer Street on the Lynnfield Common next to the Centre Congregational Church. 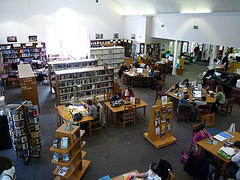 The mission of the Lynnfield Public Library is to facilitate townspeople of all ages in the meeting of their personal, professional, informational, educational, recreational and cultural needs by providing both current technological and traditional means of access to materials, programs, and services.

At age eighteen, Miss Elizabeth W. Green became the first Head Librarian for the Lynnfield Public Library.  The Library opened on July 22, 1892 with a collection of 554 books in a room in the then new Town Hall.  Miss Green would go on to serve the Town of Lynnfield as Librarian for 65 years before retiring on December 31, 1957.

Five trustees are each elected for a three-year term.